Buying your first Airsoft gun in the UK

Just getting started? Then post here. Helpful, friendly people who have been in your shoes will help.
Locked
1 post • Page 1 of 1

Buying your first Airsoft gun in the UK 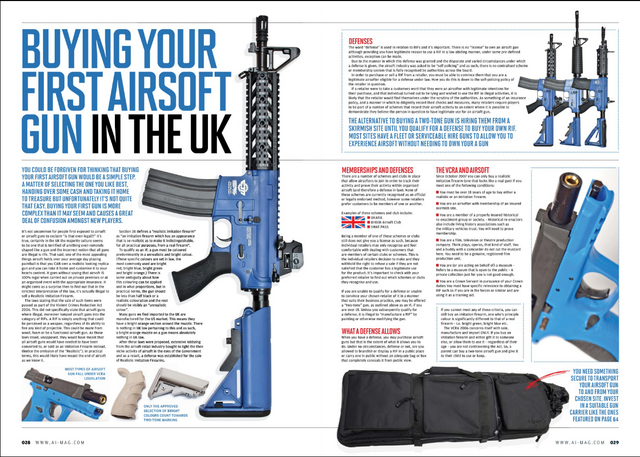 You could be forgiven for thinking that buying your first airsoft gun would be a simple step. A matter of selecting the one you like best, handing over some cash and taking it home to treasure but unfortunately it’s not quite that easy. Buying your first gun is more complex than it may seem and causes a great deal of confusion amongst new players.

It’s not uncommon for people first exposed to airsoft or airsoft guns to exclaim “is that even legal?!” It’s true, certainly in the UK the majority culture seems to be one that is terrified of anything even remotely shaped like a gun and the incorrect notion that all guns are illegal is rife. That said, one of the most appealing things airsoft holds over your average day playing paintball is that you CAN own a realistic looking replica gun and you can take it home and customise it to your hearts content. It goes without saying that airsoft IS 100% legal when carried out on private premises or at an organised event with the appropriate insurance. It might come as a surprise then to find out that in the strictest interpretation of the law, it’s actually illegal to sell a Realistic Imitation Firearm.

The laws stating that the sale of such items were passed as part of the Violent Crimes Reduction Act 2006. This did not specifically state that airsoft guns where illegal, moreover lumped airsoft guns into the category of RIFs. A RIF is simply anything that could be perceived as a weapon, regardless of its ability to fire any kind of projectile. This could be made from wood, foam or be a functional airsoft gun. As those laws stood, unopposed, they would have meant that all airsoft guns would have needed to have been converted to, or sold as an Imitation Firearm instead, (Notice the omission of the “Realistic”). In practical terms, this would likely have meant the end of airsoft as we know it.
Section 38 defines a “realistic imitation firearm” as “an imitation firearm which has an appearance that is so realistic as to make it indistinguishable, for all practical purposes, from a real firearm”.

To qualify as an IF, a gun must be coloured predominantly in a unrealistic and bright colour. (These specific colours are set in law, the most commonly used are bright red, bright blue, bright green and bright orange.) There is some ambiguity about how this colouring can be applied and in what proportions, but in practical terms, the gun should be less than half black or a realistic colouration and the rest should be visibly an “unrealistic colour”.

Many guns we find imported to the UK are manufactured for the US market. This means they have a bright orange section around the muzzle. There is nothing in UK law pertaining to this and as such, a bright orange muzzle on a gun means absolutely nothing in UK law.
After these laws were proposed, extensive lobbying from the airsoft retail industry bought to light the then niche activity of airsoft in the eyes of the Government and as a result, a defense was established for the sale of Realistic Imitation Firearms.

The word “defense” is used in relation to RIFs and it’s important. There is no “license” to own an airsoft gun although providing you have legitimate reason to use a RIF in a law-abiding manner, under some pre-defined activities, exception can be made.
Due to the manner in which this defense was granted and the disparate and varied circumstances under which a defense is given, the airsoft industry was asked to be “self policing” and as such, there is no centralised scheme or membership system that is fully recognised by authorities across the board.

In order to purchase or sell a RIF from a retailer, you must be able to convince them that you are a legitimate airsofter eligible for a defense under law. How you do this is down to the self-policing policy of the retailer in question.
If a retailer were to take a customers word that they were an airsofter with legitimate intentions for their purchase, and that individual turned out to be lying and wished to use the RIF in illegal activities, it is likely that the retailer would find themselves under the scrutiny of the authorities. As something of an insurance policy, and a manner in which to diligently record their checks and measures, many retailers require players to be part of a number of schemes that record their airsoft activity to an extent where it is possible to demonstrate they believe the person in question to have legitimate use for an airsoft gun.

There are a number of schemes and clubs in place that allow airsofters to join in order to track their activity and prove their activity within organised airsoft (and therefore a defense in law). None of these schemes are currently recognised as an official or legally endorsed method, however some retailers prefer customers to be members of one or another.

Examples of these schemes and club include:
• UKARA
• British Airsoft Club
• SWAT PASS

Being a member of one of these schemes or clubs still does not give you a license as such, because individual retailers may only recognise and feel comfortable with dealing with customers that are members of certain clubs or schemes. This is the individual retailers decision to make and they withhold the right to refuse a sale if they are not satisfied that the customer has a legitimate use for the product. It’s important to check with your preferred retailer to find out which schemes or clubs they recognise and use.

If you are unable to qualify for a defense or unable to convince your chosen retailer of it in a manner that suits their business practice, you may be offered a “two-tone” gun, as outlined above as an IF, if you are over 18. Unless you subsequently qualify for a defense, it is illegal to “manufacture a RIF” by painting or otherwise modifying the gun.

What a defense allows

When you have a defense, you may purchase airsoft guns but that is the extent of what it allows you to do. Under no circumstances, defense or not, are you allowed to brandish or display a RIF in a public place or carry one in public without an adequate bag or box that completely conceals it from public view.

The VCRA and Airsoft

Since October 2007 you can only buy a realistic imitation firearm (one that looks like a real gun) if you meet one of the following conditions:

You must be over 18 years of age to buy either a realistic or an imitation firearm.
You are an airsofter with membership of an insured skirmish site.
You are a member of a properly insured historical re-enactment group or society. – Historical re-enactors also include living history associations such as the military vehicles trust. You will need to prove membership.
You are a film, television or theatre production company. – Think plays, operas, that kind of stuff. You and a buddy with a camcorder do not cut the mustard here. You need to be a genuine, registered film production unit.
You are (or are acting on behalf of) a museum – Refers to a museum that is open to the public – a private collection just for you is not good enough.
You are a Crown Servant in pursuance of your Crown duties – You must have specific relevance to obtaining a RIF such as if you are in the forces or similar and are using it as a training aid.
If you cannot meet any of these criteria, you can still buy an imitation firearm, one who’s principle colour is significantly different to that of a real firearm – i.e. bright green, bright blue etc.

The VCRA 2006 concerns itself with sale, manufacture and import ONLY. If you buy an imitation firearm and either gift it to someone else, or allow them to use it – regardless of their age – you are not contravening the Act. So, a parent can buy a two-tone airsoft gun and give it to their child to use or keep.